On Sunday (July 1st) we decided to go early in the morning, to Yosemite National Park. The plan was to go on a hike, and eat our picnic lunch. We got there as the sun was still coming up over the mountains, it was gorgeous! So thankful Korey got the shot above.

Pulling up to the park entrance we could tell that the day was about to be amazing. Everywhere we looked, it was so beautiful.

Here is a shot of Yosemite lake, as we were getting close to the park entrance. 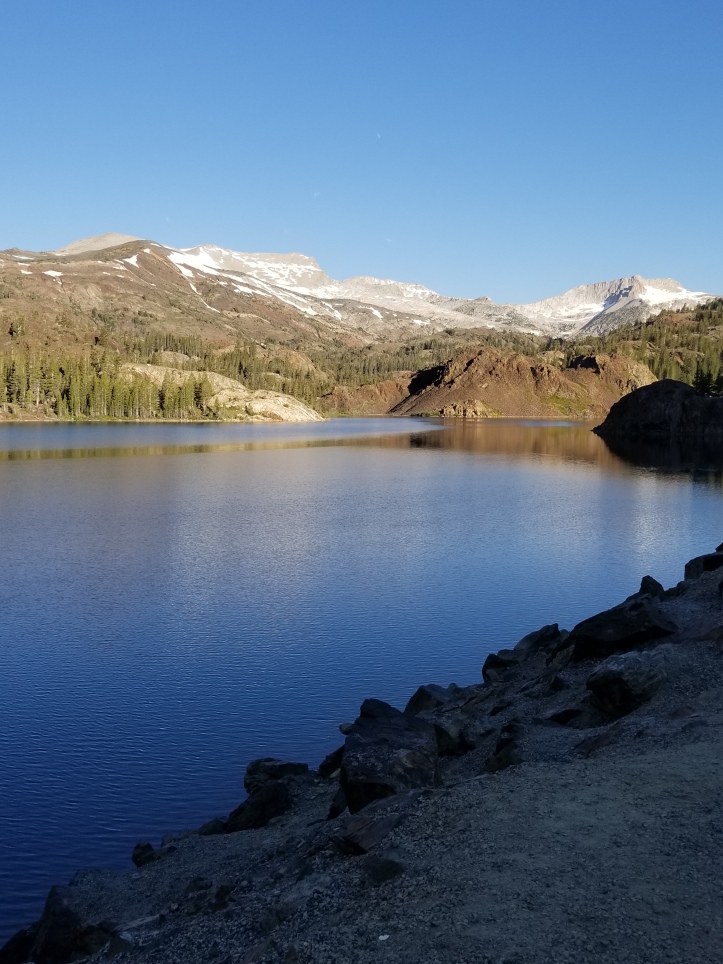 There were trail-heads all over the place, so it was a little rough to decide which trail to hit up…. did we want a leisurely stroll to check out the scenery or a little more of a hike? We ended up choosing a moderately strenuous hike up to Lembert Dome, from Tuolumne Meadows. The sign said it would take roughly 3 hours, so we took off. There were people all over the place and for some reason, no one was heading on the trail that we took. Not gonna lie…we were a tad nervous about bears and no other people, but we just talked loud and trucked along. We saw a deer right off the bat…we stopped to watch and then started the trek straight up hill…. there were jokes about how there wasn’t a chance that this route was “moderately strenuous”, it was straight up hill with lots of rocks to get around in the trail. If we were to see a bear, they would not have to work very hard to catch us. Once we made it to an area where there was an actual sign telling us we were on the correct trail, we saw that we weren’t very far from Dog Lake, so we decided to go for it, check out the lake, then continue on to the top of the dome. It was so peaceful. No one around, but there were bugs, and LOTS of them. We stayed long enough to take it all in, then headed on to continue the hike.

Shot of Dog Lake…Korey is getting pretty good at taking pics with my phone. We need a good camera, until then, he is workin’ with what he’s got and doing a great job!

We escaped without any new bugbites, and the trail got much easier after the lake. This is when we also started to see people. We made it up to Lembert Dome, and then climbed up to the top. Luckily it was something that could be done with hiking shoes and not a bunch of equipment.

It was BEAUTIFUL! We plopped down at the top to eat our sandwiches and take in the view. And… UMMMM…. we climbed that dang rock! GO US!

View from the top….. 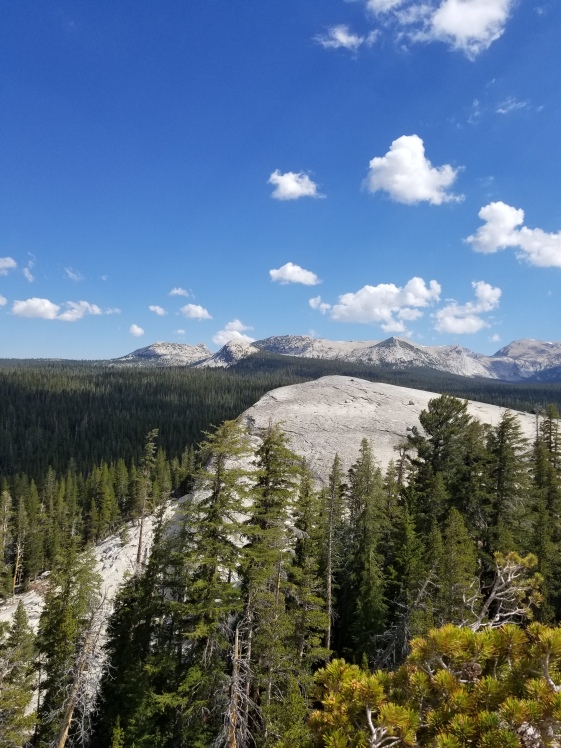 And the view of the rock we had just climbed behind us….we were feeling pretty proud since we just got back into hiking and not in the best mountain scaling shape 🙂

We also realized that where we started to see all of the people, there was a much easier trail than the one we chose…you better believe that is what we took back down the mountain 🙂 of course, to find that when we got to the main road we had to walk 2 miles to where the truck was parked, but that was fine.

Since we were already there, and it was just barely noon, we thought why not take the drive over to the other side of the park?! it was roughly 2 hours to get to all the touristy stuff, but we wanted to check it all out. So we hit the road. The drive was beyond amazing. I cannot describe it, we both were in awe as we drove through. There may or may not have been happy tears and I won’t say who they may have been from… 🙂

We were able to make it to El Capitan and just happened to get a pretty great parking spot where we turned around and it was there, staring at us. We walked out into the field across the way to get this shot. There was a family who had a tour guide nearby, so we snuck over to listen in… luckily we did because we saw a couple people climbing El Cap and we probably would have missed it on our own. Pretty crazy, but so very cool to see!

What an amazing day…..

This was pretty much or view yesterday while traveling from Albuquerque to Flagstaff. For about 10 miles we hopped on route 66 to avoid construction traffic on I-40, we were so thankful for a quick & easy alternate route 🎉
Loving the New Mexico sunsets! We've been in Albuquerque all week and decided to drive up to Sandia Crest Peak on Monday. Made it just in time for the red & orange glow 💗
We are back on the road!!!!
Today was a day of prepping to get back on the road 🎉🎉🎉
This pic was from our fun morning kayaking in Florida before Korey went to the ER for abdominal pain (12/30/20)....the start of a long 10 months with 4 colon surgeries. Today he is 8 days post op from the last surgery to take down the ileostomy and he is on the mend 💗 doing so well that we finally started making reservations and picked Nov 13th to hit the road again 🎉🎉🎉
Loving the cooler Texas temps! We were over the 90s with humidity. We are going stir crazy too, we've been in this spot since Feb. Korey's final surgery is a week from tomorrow 🥳 it was supposed to be last Monday but there was a scheduling error. They ended up just doing a colonoscopy (thankfully since he prepped) though and the incision from where his colon was reconnected is fully healed 🙌
Loading Comments...
%d bloggers like this: