On July 6th, we ventured out to our very 1st National Monument – Devil’s Postpile. We decided to loop in Rainbow Falls into that hike as well. We started out the day moving our fithy to a new spot, and then hit the road to Mammoth. So we got a little bit of a later start for a hike in the heat, but as hot as it was….it was SO WORTH IT!

To get up there, you have to catch a bus up at the Mammoth lodge. It was jammed with people, standing room only, on a one lane road up the side of the mountain. Beautiful views, but a few scary moments when another bus or car came in our direction. It took roughly 30 minutes to get up to the stop to hike to Devil’s Postpile. It was a pretty easy hike, not too many hills or rocky areas, and had beautiful views. Since it wasn’t a crazy hard hike, there were also a lot of people, but we still enjoyed it.

The picture doesn’t do it any justice. It was huge and so interesting. We learned that it was formed by lava & glaciers, and that in the early 70’s Governor Reagan and President Nixon saved it from being demolished to be turned into a freeway from the west to the east. We are learning so much from exploring, and it is making us so excited to check out all of the destinations on our list, and those that we don’t even know about just yet.

The hike to Rainbow Falls and up to the stop where we hopped on the bus to get back down the mountain was a mix of awesome, beautiful and so sweaty hot. By this time in the day the sun was beating down on the trail. We normally hike early in the morning to beat the heat, but we still had a great time. 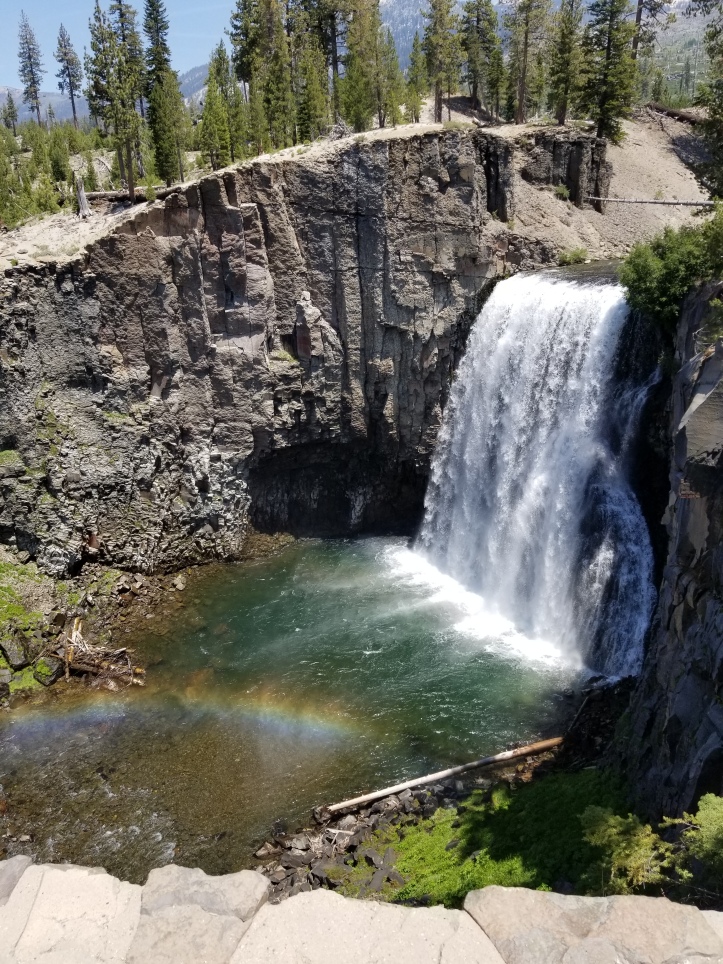 Rainbow Falls was beautiful. All that heat was worth it, to get to see it. The hike there took us above streams where we watched fly fisherman, which was pretty fun too. It’s hard to see him in the picture below, he is standing in the middle of the stream.

Normally you can hike down to the falls, but it was unfortunately closed while we were there. Even after getting to see both the falls and Devil’s Postpile, the highlight was on our way back down the mountain when the bus had to slam on the brakes because a baby bear ran across the road. We FINALLY got to see a bear! It all happened so quickly, and we watched as long as we could, there was zero time to grab the phones to snap a picture. We have been on the lookout for a bear the entire time we have been in the area. We were so excited to get to see one, and a baby at that! Too bad mama wasn’t behind the baby, so we could see her too.

Another great adventure day in the books.

How are we so lucky to get to have this life?! In the last 5 weeks we have been able to see so much, have enjoyed multiple hikes, and learned so much about this area. It is only just beginning too…. This is going to be SO-MUCH-FUN!!

The sand and water in the gulf is sooo pretty! 💓 the week between Christmas and New Years we stayed in Panama City Beach and loved it! We stayed at Sun Outdoors and would totally stay here again. There was lots of yummy food, shopping, relaxing and mini golf. So happy we switched our original Orlando plans and enjoyed the beach that week 🙂
Blackhills of South Dakota has definitely been one of our favorite stops. Looking forward to our 5th stop there sometime down the road.
We stayed at our 1st Sun Outdoors park over Christmas this year and loved it! It was a really nice park in St Augustine and we scored a huge corner spot 🎉 loved the location, super close to everything. Hank made a friend and the dog park with his same energy level so that was a win as well 😀 We will definitely stay here again next time we are in St Augustine! 💓
I never thought temps in the 50s would feel so good! 😁 today has been nice and tomorrow is supposed to be a tad warmer 🎉 enjoying our stop in Panama City Beach ⛱️
Hope everyone had a nice Christmas! 🎄This year we spent time in St Augustine 💗 what a beautiful city with so much history! We loved our time there, except for the crazy cold temps...and we thought Christmas in Florida would be warm 🤣
Loading Comments...
%d bloggers like this: