If it could go wrong…. IT DID

We have been having so much fun on the road. It really is the best decision we have made. BUT, we were warned that just because we bought a brand new fifth wheel, it doesn’t mean that we wouldn’t have any issues.

It feels like everything went wrong within a week.

Outside of the little issues we encountered before the week-O-troubles (broken fridge handle and tears on our roof), we felt like last week was just one thing after another.

It started with our drive to Reno. We stop often to check the tires. The tires that came on the rig were “F” rated…supposed to be a better tire than what comes on some, but certainly not the best. On a stop to let the dog run around and check the tires, we noticed a screw in one of the tires. We called Discount Tire in Reno, to see if they could fix it, and accommodate us, they said yes, so we hightailed it up there. As soon as we pulled into the lot, they came running out to tell us they did not have room, and we needed to go turn around and park across the street. Another RV beat us there, so there was no longer room for us to park. Another customer was so kind and went out into the street to stop traffic so we could back up and move to park while we waited our turn. The guys at Discount were SO HELPFUL, especially Mike McFarlane, the manager. He called us as soon as they were ready, we pulled in, he let us take Sully inside (it was really hot) while we waited, they fixed it for FREE!, then when they were done, Mike stopped traffic for us, so we could back out into the busy street and head out. We made it to our RV park, hooked up, cranked the a/c and headed out to get some food. We talked about the need to upgrade the tires sooner rather than later that evening, and decided that we would for sure go to Discount Tire again. If anyone is ever in Reno, and in need of tire assistance, for sure go and see Mike @ Discount. 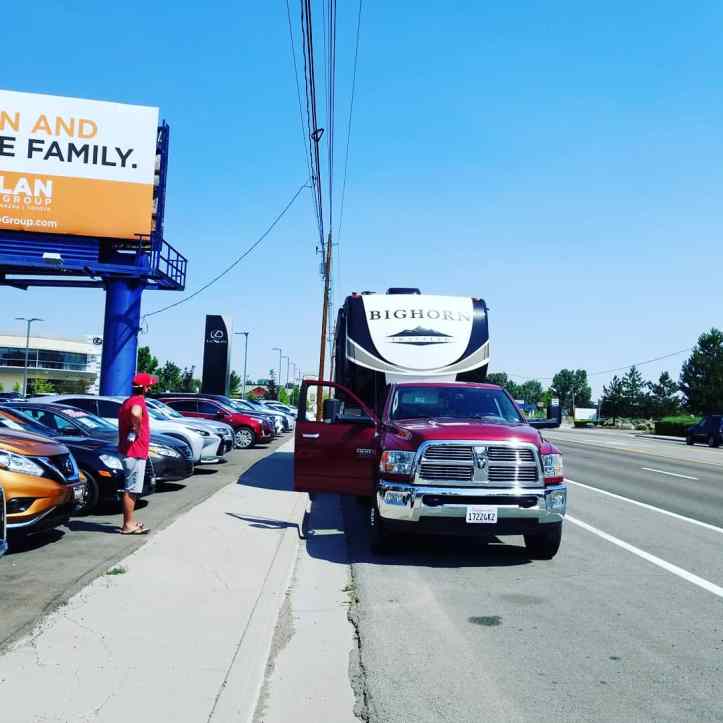 The next morning we woke up early to start our drive up to Ashland. It was a beautiful drive and we thankfully arrived at a decent time to be able to set up and relax before heading out to get some food. The next issue was that Tuesday night. The temps had been over 100 degrees since arriving on Sunday afternoon and the fridge was running a little warm. Korey went to go and turn it down, so it would hopefully cool down more, and accidentally hit the on/off button. As soon as he hit it, he hit it again to turn the fridge back on. Instead of turning on, it showed an E0 error code. Apparently this means that there wasn’t any communication between the display and the power module. All wires and fuses were checked, tightened and checked again. We couldn’t get the fridge to turn back on. It was late when this happened, so we went to bed and decided to deal with it in the morning. When we woke up, Korey was back at it…rechecking all of the wires on the back, disconnecting and reconnecting, unhooking from power, really anything to try to reset the fridge. Even though there were no blown fuses the night before, he checked again in the morning and sure enough…a blown fuse. He swapped it out, held his breath and hit the on/off button…. NO ERRORS and it actually turned back on. Whew… close call on that one, we didn’t want to have to pause from our plans to take this thing into someone to wait for approval on warranty work, then the work itself. We didn’t open it up for 2 days, it was a slow go at getting it to cool down in 100 degree weather, but we were back in action!

On Saturday July 28th (Korey’s 40th birthday), we woke up early and left Ashland, heading for Vancouver for a one night stop over, as we head to Anacortes. Korey was doing his normal tire pressure check before hitting the road, and noticed that one of the tires appeared to be separating. We decided to go ahead and carefully head on out, keep an eye on it, and call the Discount Tire in Eugene as soon as they opened at 8am. This location had room for us to pull around the building and park (a lot less stressful than the parking lot at the Reno location). 2 other RVs were in line ahead of us, so we knew we were in for a wait, but Joe Hull (the Sr Asst Manager) was super helpful. We spoke to him before arriving to confirm that they had the “G rated” tires that we wanted in stock and room for our rig. He was so friendly and so apologetic for the amount of time we were there waiting for the work to be done (we were there for 3 hours), but it was not anyone’s fault, no need to apologize, they were so busy and we were just so thankful that they had the steel belted tires in stock and at a much better price than we anticipated. Plus it was Oregon…sales tax free! He gave us $35 for each tire so that knocked even more off of the price, which was awesome. Same as Reno’s location… see Joe in Eugene if you need tire help!! As soon as we left, we could tell a difference in the ride. It was much smoother than our old tires. They only had 900 miles on them, so we weren’t excited about needing to swap them out so soon, but knowing that these new tires are safer certainly makes us both feel better. A tire blow-out is at the top of the fear list for this adventure. 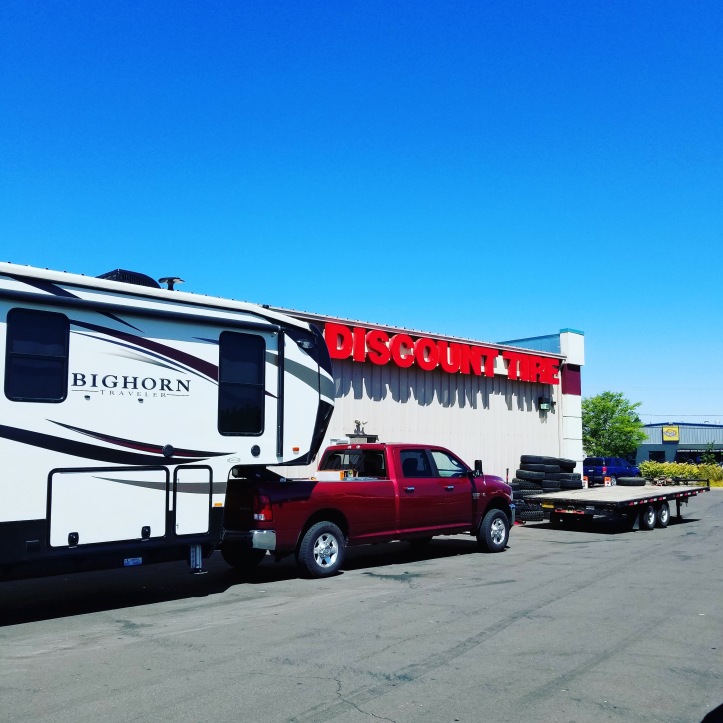 Now that we had brand new tires, we got back on the road to head to Vancouver. We were looking forward to getting there, hooking up and going to meet Korey’s grandparents and aunt for dinner. A nice way to end the long day!

When we arrived at the RV park, Korey was plugging in and hooking up the water while I went inside to get ready to put the slides out. I noticed that there was glass on the floor in front of the bathroom door. My 1st thought was “oh crap…Korey is going to flip out” before I even knew what the problem was. I opened the bathroom door to a gazillion tiny pieces of glass all over the place. At some point between checking the tire that was separating an hour before we got new tires, and getting to Vancouver, one of the three shower doors had shattered all over the floor. We have no idea when it happened, or when the door latch came unhooked. We had already had a long day, so we decided to sweep the glass into the bathroom so that Sully didn’t step on it, close the door, and go out to dinner. We needed that break and knew that the clean up would be a big project.

We enjoyed our visit with Bill, Barb, and Missy, then went to Target to get our new bathroom shower curtain, rod, and a sturdier hand broom & dust pan. We got back home and started the clean up. It took two and a half hours to sweep, vacuum, mop, pick glass out of spots that the broom didn’t reach and hang a curtain rod and the new shower curtain. What-A-Day! Happy 40th Birthday to Korey….he got to drive all day, get brand new tires, and a partially remodeled bathroom! 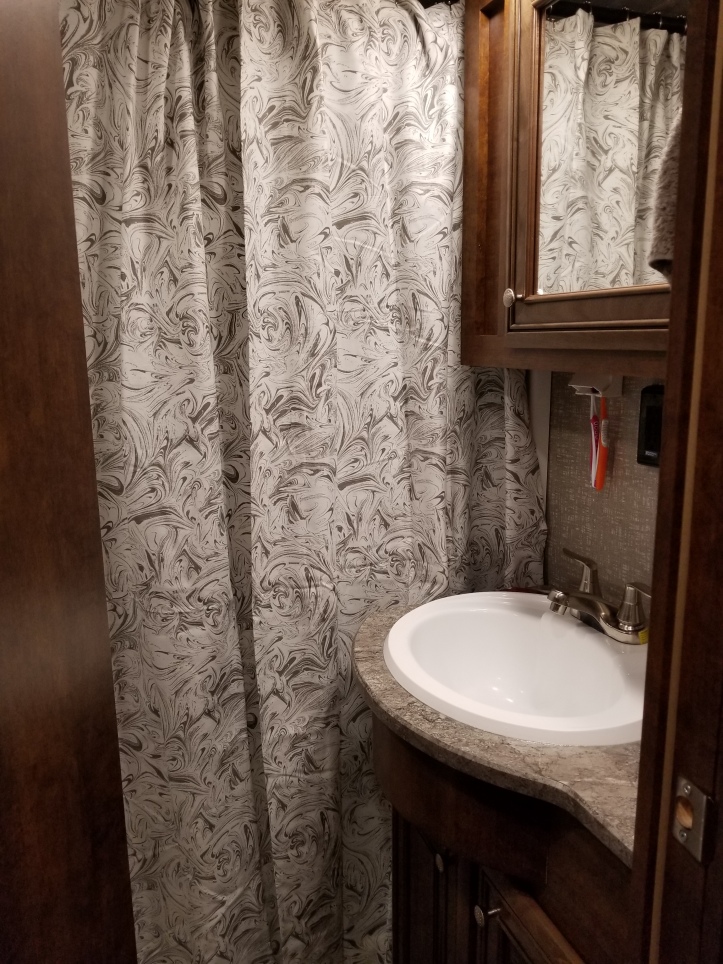 The decision has been made to remove the glass shower doors all together and stick with the curtain, so this doesn’t happen again. While the bathroom now feels smaller, it also looks nice, so it’s not a bad deal. But still…the whole ordeal was not expected or appreciated.

On the 29th, we hooked up, hopped in the truck and made really good time on our drive to Anacortes. When we arrived, we held our breath as we checked the 2 remaining glass doors (we had them secured while driving because we have not yet removed them), and thankfully they stayed in place. So far so good…hopefully our streak of RV hazing is complete, for now. We totally understand that we will have troubles in this full time RV life, but having so many things go wrong in such a short frame of time was not very exciting. Luckily we rolled with the punches, fixed what needed to be fixed as we hit those bumps and kept going.

The sand and water in the gulf is sooo pretty! 💓 the week between Christmas and New Years we stayed in Panama City Beach and loved it! We stayed at Sun Outdoors and would totally stay here again. There was lots of yummy food, shopping, relaxing and mini golf. So happy we switched our original Orlando plans and enjoyed the beach that week 🙂
Blackhills of South Dakota has definitely been one of our favorite stops. Looking forward to our 5th stop there sometime down the road.
We stayed at our 1st Sun Outdoors park over Christmas this year and loved it! It was a really nice park in St Augustine and we scored a huge corner spot 🎉 loved the location, super close to everything. Hank made a friend and the dog park with his same energy level so that was a win as well 😀 We will definitely stay here again next time we are in St Augustine! 💓
I never thought temps in the 50s would feel so good! 😁 today has been nice and tomorrow is supposed to be a tad warmer 🎉 enjoying our stop in Panama City Beach ⛱️
Hope everyone had a nice Christmas! 🎄This year we spent time in St Augustine 💗 what a beautiful city with so much history! We loved our time there, except for the crazy cold temps...and we thought Christmas in Florida would be warm 🤣
Loading Comments...
%d bloggers like this: